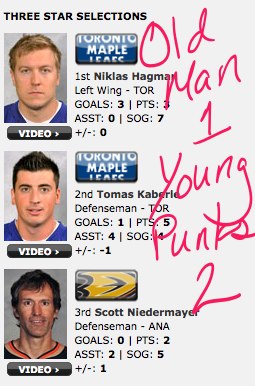 Ever feel like you’ve started on the wrong foot? Maybe the project didn’t get off to a good start or the date started with you falling down a flight of stairs . . .

I hear these things, um, happen….

Can you get the win after a rough start?

Just how bad was this losing streak? 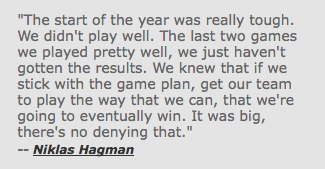 The Maple Leafs blew 8 regular season games to end up in the hole 0-7-1. That gives them ONE total point for a month’s worth of work.

Well, now they’ve tripled points, they’re up to 3! Mind you the division leaders sit with 18 points. Not an easy gap to close.

Who knew Haggie could step into a leadership role. We traded him a couple of yeas ago. Looks like it suits him well. 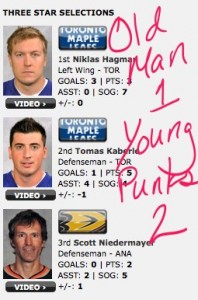 As for Anaheim, well, they’re in the worst way. If they weren’t Pacific Division rivals I might feel sorry for them. Look at Scott, how old is he now? He looks like a cowboy who has been left on the prairie too long. Get that man some moisturizer!

Sports Stat of the Week: Best comeback from a lousy Season to win it all . . .

The 2006 Cards do indeed hold the record for worst regular season, but they got off to a great start so it’s not quite what I was looking for . . .

As for the leafs, let’s just plan to keep the win streak short. The Leafs blow through town Wednesday night. Go Stars.

15 thoughts on “Best Comeback – Sports Stat of the Week”