There are a few ways to go through this. Let’s start with the premise that teaching attracts liberals. That premise is either true or not true. How do we decide, scientifically? We have to identify the population of teachers as liberal or not liberal versus the same in the overall population.

If it is true that teaching attracts liberals disproportionally, what is it about teaching or liberalness that brings the two together?

Could it be that Teacher Unions somehow block non-liberals? Or matriculation for conservative PhD students is somehow blocked by liberal faculty….

If it is false, how did the profession get the reputation? Better yet, has it always been this way?

So let’s tackle these one at a time (1999 data from the North American Academic Study Survey):

By their own description, 72 percent of those teaching at American universities and colleges are liberal and 15 percent are conservative, says the study being published this week (April 2005). The imbalance is almost as striking in partisan terms, with 50 percent of the faculty members surveyed identifying themselves as Democrats and 11 percent as Republicans….

“What’s most striking is how few conservatives there are in any field,” said Robert Lichter, a professor at George Mason University and a co-author of the study. “There was no field we studied in which there were more conservatives than liberals or more Republicans than Democrats. It’s a very homogenous environment, not just in the places you’d expect to be dominated by liberals.”

In contrast with the finding that nearly three-quarters of college faculty are liberal, a Harris Poll of the general public last year found that 33 percent describe themselves as conservative and 18 percent as liberal.

The evidence I have for liberal professors blocking the advancement of conservative students is painful and anecdotal, so give me a few days to dig for the science to support or deny this – look for that next week.

Has it always been this way?

In the last major survey of college faculty, by the Carnegie Foundation for the Advancement of Teaching in 1984, 39 percent identified themselves as liberal. 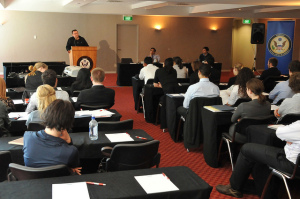 system. I have no beef with college professors who fly left of the spectrum. That’s your gig. And, yes, I will defend your right to have those opinions no matter how much I disagree with them.

But what about our primary and secondary education system? By the time a child reaches college he or she should be able to think critically and has been molded by mom and dad. When you are 5 years old, you take everything said to you at face value.

I have a very strong opposition to politics in the classroom for those who are not even the age of reason.

Give the lack of understanding for the basics (reading, writing, arithmetic) I see in adult graduate level students, there is no time for political shenanigans in the primary classroom. Get back to math, reading and writing. Science, critical thinking, scientific method – how to conduct an unbiased experiment and scientifically assess the results… those have a solid place in late elementary school and middle school. Being told smart cars are “better” in kindergarten, no place. No thank you.

So let’s leave this politicing aside and look at something perhaps more important, teacher qualifications. If teachers are qualified to teach our children how to think and to love learning, then perhaps the right/left (rather left/far left) leanings become less relevant . . ..

According to the “Meeting Highly Qualified Teachers Challenge” report published in 2003, 28 of 29 states where the same standardized teaching tests are used, a teacher may be below the national overall (teaching and non-teaching populations) average in mathematics and still be a teacher. 29 of 29 for reading . . . and in some states you may perform in the bottom quarter (i.e. with more than 75% of the population performing better than you did) and still meet the requirements to become a teacher.

Yet, from my personal experience it is next to impossible to pursue the very low pay, grueling hours of teaching due to the certification process. Thanks, I’ll stick with private education.

As large donors to the Democratic party, the American Federation of Teachers and the National Education Association have an agenda, but it doesn’t seem to be educating our young ones.

Want more? A site dedicated to information on teachers’ unions.

Image courtesy of US Embassy

10 thoughts on “Does Teaching Attract Liberals?”