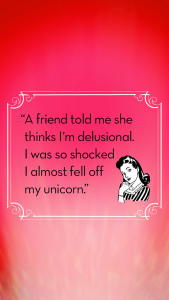 A rant about the failure of of educational system. Are our best and brightest simply delusional?

A suitor, Jay*, recently approached me about taking the GMAT. He knows that I teach for ManhattanGMAT (a super fantastic group!) and he was prepping to take the test on his own. I shared some general words of advice and suggested a few particular areas of study that most self-study students ignore. Let me state clearly, he is NOT a ManhattanGMAT student.

We had drifted apart by the time he took his test, but he did call to give an update on his progress. He performed well below his expectation and was shocked. I was not so shocked…. While Jay is a nice guy, he is not likely to do well on the GMAT and is likely to struggle through any MBA program. Comprehension is not his strong suit.

For example, after 6 months of study, he did not understand that the test is adaptive. In other words, the test gets harder the better you do.

On the phone he complained that the test was more than a “test of the basics,” and he wasn’t expecting it to be so hard. The books he used clearly state that the test is adaptive – so he simply missed this point, and the test is actually a test of the basics . . . however it is a test of your MASTERY of the basics. In other words, it is not sufficient to be able to calculate the area of a triangle only when given the base and the height, you may need to calculate the base and the height from information given. How often do your business problems come with a full fact set, clear solution and “correct” answer?

Jay proclaimed that he understands triangles and that he earned a 98 in Algebra and was an “A” student in math. He “understands” Geometry, Algebra, Equations, Fractions….” Yet, he was unable to solve for the Area of the Triangle above. He remembered 1/2 b*h, but was unable to find the height of the triangle.

He has superficial understanding of triangles but does not understand the concepts.

I have no bone to pick with Jay, but I do want to shake up the school district that sent him out into the world believing he understands math and is “good at math.” He is delusional. If I had a 98 in math, I too would think that I was pretty good at it.

Perhaps he is a one-off? No, like the two Algebra II students I tutored before December finals (2008) from his same school district, he is sadly not a one-off. The Honors student was unable to factor 9x^2 – 25y^2. Sure, how often do you need this stuff? Rarely. BUT, we are training students to believe they actually know things that they don’t even begin to grasp. It is shockingly bad. Yet, from a student perspective I understand part of the Whys this is happening. Have you seen these textbooks? Holy bleeep!

Current textbooks are 100 pounds of pure horrible. The Algebra II textbook explained parabolas in such a way I began to doubt what I know. The way the material is presented lends itself to short-term memorization, not to understanding, and certainly not to mastery.

It is better to understand WHY 2+2 is to equal 4 then to memorize the problem 2+2 = 4. We are feeding our students superficial knowledge and then patting them on the heads with inflated grades. Folks, no amount of self esteem can help you when you suck at math. You will have trouble – you will spend more than those who understand math because you are more likely to be taken by the car dealer, mortgage broker, credit card company, and even your little punk brother (who understands math). It is better to train ALL of our students to have basic life skills. Math is one of those life skills.

So maybe we have to pay Ashley Alasky to add math concepts to all her syrupy songs. That’s something I’d support with a few dollars (private dollars).