Minnesota Signs McKeon
No, of course not. I wouldn’t last 2 snaps on a field full of kickers. Having had the opportunity to kick one between the uprights at Texas Stadium I can also state that I wouldn’t make it as a kicker (missed completely).
Even those of us without TV and Radio know that Brett Favre has signed with the Vikings. The popular story is how he’s now playing for the rival team . . . so instead, we’ll talk economic impact.

Speaking of risks . . . nothing like spending $41.7M on young, not-tested-in-NFL, used-to-pelt-Kate-with-acorns Stafford, but we’ll talk about that next week. Back to Brett.

The past few months Favre and the Vikings have had back-and-forth negotiations. But, about a month ago, the underground put it as a done deal. As a former ticket broker, I received an alert to be ready for sales to spike from one of our networks. At no other time have I received an alert. No event, no concert, no nothing has warranted the kind of warning that the possibility of Brett signing did.

On August 16th, we received an even more urgent warning.

Another first. Orders are typically processed immediately unless they happen overnight. In this case, no lag allowed. All brokers were expected to be processing 24-hours a day until the system cleared and the market settled. That would be like telling the NYSE it couldn’t 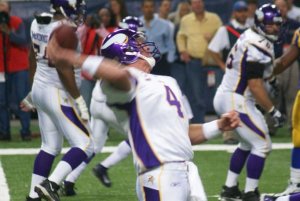 close until hysteria was over. Brett signed August 18th, exploding already unseasonably high Viking ticket sales. From the broker’s perspective it was a delightful nightmare. Speculators entered the fray competing with real customers. Mismatch of supply and demand, market clearing mechanisms pushed to the brink….

Brokers prefer to sell to customers as opposed to speculators as speculators have a tendency to walk away from their orders when the market turns. Short of a shotgun, there’s not much one can do about that. In normal market conditions, we can weed out the mass speculators 90% of the time (by choosing to not fill their orders).

So how much was the day of signing worth?

Now, the Vikings aren’t seeing those dollars directly, but they will see an increase in merchandise spending and in TV/radio revenue dollars.

Brett is like a small planet with his own gravitational pull. Where he goes so to do the dollars. So, is it a big risk? No.

Favre is to Football as Meatballs are to Spaghetti – so much better together.