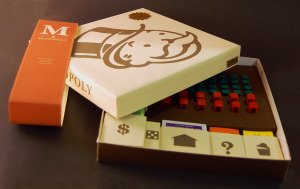 The November-December issue of Mental Floss shares a poignant example of how a simple game can save lives. During WWII, the Red Cross delivered monopoly sets that contained secret extras like metal files, compasses, silk maps of safe houses and even real Italian, French and German currency under the fake money.

How to know if your set has secret extras? Look for a red dot in the game’s “Free Parking” space.

Three cheers for British Monopoly licensee John Waddington Ltd. As Brian McMahon of Mental Floss reports, “more than a few of (the 35,000 POW who escaped German camps) certainly owe their breakout to the classic board game.”