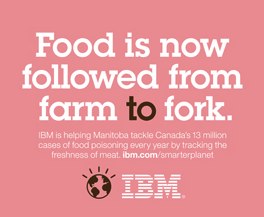 IBM recently launched an ad campaign highlighting their work on education, crime prevention and food poisoning reduction . . . okay, really, the interlocking theme is Outcomes for a smarter planet. But they demonstrate those outcomes in the fields of education, food safety and crime prevention among other areas.

The graphics are cute, it’s the statistics that scare the living daylights out of me.

Nope, nowhere near 13 million. Surely they don’t mean to state that each resident of Moanitoba experiences 13 bouts of food poisoning a year, or roughly 1 a month with an extra in July at a poorly planned BBQ, so I re-read the figure…. Oh, 13 million cases in CANADA. Apologies to my friends up north, but are there 13 million people in Canada?

Okay, so Canada does have more than 13 million people, but how are you feeling about a steak in Canada? On average, you are expected to get food poisoning at least every two and a half years. That’s not counting boozing up with your buddies and feeling the ill effects the next day. This concerns a preventable condition when some nasty bacteria/virus or assorted other critter ends up in your tummy.

This brings up all sorts of other questions. Given the fairly frozen nature of Canada, how are they having such trouble with meat spoiling? We’re roasting at 110 degrees and we manage to get meat to market in Texas. We’re not talking about Thailand with a devalued Baht and limited refrigeration. It’s Canada – supposedly the example of exceptional health care and pensions. One has to wonder . . . is this how they manage their population?

At the very least Team Canada might want to request that IBM remove that stat from these posters rolling out across the internet. It’s a shocking figure that upon further research is even more shocking. I moved to China for the Summer of SARS and ate off of street carts, but I’m not sure I would have a steak in Montreal.

How do you feel about Canadian meat?

1 thought on “IBM and Canada – Bad Food or Bad Numbers?”