For interest in a concept near and dear to my heart, please visit Miss Mentor today. I’ve just updated the How to Build Wealth Series which takes users through the process of laying out the most sensible plan of action for managing their funds.

It’s not the sexy, here’s how you hedge with puts and calls, advice but rather the clean simplicity that, really, we could all use. How much benefit do you get following the market 24/7? Unless you’re a trader, and even then, unless you’re a trader with an excellent track record, I’m willing to bet the combination of time, money and energy you’ve spent chasing your own tail would be better spent plowed into a local business, your own business or just 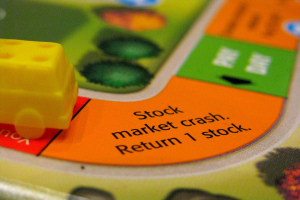 about anything over which you have a modicum of control. Since most of us have no appreciable control over the NYSE, why spend so much time and energy watching it?

It’s kind of like going to a game. Let me explain. I watch hockey . . . a LOT of hockey. While I do sit close to the ice, I have very little ability to influence any given game. Sure, I could say mean things to the kid in the penalty box, but if he hasn’t heard the taunts I have by the time he’s reached the NHL, well, then, he’s probably deaf and won’t be hearing mine. I could also flash everyone on the ice . . .  The novelty of it might influence a particular play, but not too likely to do much else. I could also wear an inflammatory t-shirt like we did last year for the Detroit game. Chris Chelios was kind enough to approach the glass in front of us, throw off his mits and treaten to climb over to kick our asses. Very entertaining. Thank you Cheli. However our shirts last year did not influence the game – at least not in our favor.

So despite a great deal of time: 48 home games last year (with preseaon and postseason), money – I don’t even want to admit how much, and a little bit of effort, what do I have to show for my investment. Nothing. But then, I watch hockey for entertainment, not a “return.”

WTF? The point is, if you’re spending a lot of time trying to arbitrage in a game you can’t control (NYSE, NASDAQ), you should expect the same result I get from my hockey, “investment.” Nothing but entertainment. If that jazzes you, go to it. But if you want to build wealth, the place to invest your time, money and effort is in things you can strongly influence. Direct investment in businesses will give you the biggest bang for your buck. Prove me wrong.