Excuses last a lifetime. Achievement leaves you proving yourself again and again.

Sports Stat of the Week: Leadership in Hockey
I do (heart) hockey so back to hockey this week. The question ticking along today is, “How well do teams with one dominant player do . . . as determined by time on the ice.” In other words, do teams who keep 1-2 guys on the ice all the time do better than teams who more evenly rotate their fellas? 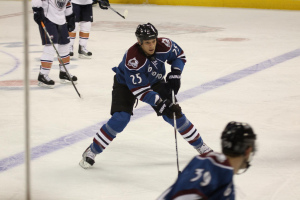 GOAL:
My goal is to determine if on the skates of 1-2 guys, teams improve their odds in chasing the Cup.

Could point to leadership – if one guy is always on the ice, he is probably the emotional team leader whether or not he wears the Captain C.

Could point to discipline.

Could point to individual bad-assness.

And as with any data manipulation – could be totally moot.

START:
I started by looking at the top 30 guys each year ranked by time on the ice. The data is from 1997-1998 season through the 2008-2009 season. Being clever, I then added a handy-dandy “strength” metric to each individual based on his team’s performance that year.

For example, Sergi Zubov DAL 1999, strength of team score = 5. He gets 5 points because that year the Dallas Stars won the Stanley Cup. For the 2000 season, he only receives 4 points because the Stars lost in the Cup finals. Each round of the playoffs has different point totals and not reaching the playoff earns the skater a zero.

DISCOVERY:
If you aggregate all skaters per team over the 11 seasons (no 2004-2005 season), then divide by the total points the team accrues over that same time frame, you get a nice ratio. Here’s how that plays out.

That’s not much to write home about, eh?

There is a trend, but it’s a 6-degree polynomial trend. Not something for a mere mortal such as myself to calculate (I (heart) excel!). The more dominant 1-2 skaters are, the higher the ratio (the vertical axis). The more success in the post season (the horizontal axis), the further to the right a point will be.

The point way out to the right represents Detroit (ugh!). They have the highest success rate of any NHL team in this time period and they tend to have a small group of guys who dominate ice time.

One of these days I will find a positive stat that doesn’t make Detroit look good….

NEXT STEP:
So I tweaked. Instead of looking at the ratio, I looked at the actually “One Guy” Points – represented by individual skaters versus the team’s overall success rate.

Voila! Now this looks promising. Teams above the trendline are leaning on 1-2 guys whereas team below the line are more evenly rotating guys on and off the ice. Still a nice dispersion above and below the line which begs the next question….

Who’s winning the Cup and who’s still a bridesmaid?

Notice the strong trend of teams above the line – those who lean on 1-2 skaters to stay on the ice for almost 30 minutes per game as averaged across an entire season. They are the winners.

So who is the forever bridesmaid? San Jose Sharks.

So, ignore Detroit’s winning ways, let’s mock San Jose for not getting the job done. They barely made it to second round games and only once made it to a conference final. They may make it to the playoffs every year (all but one), but they are forever the Bridesmaid, never the Bride.