The pink locker room has been a popular story . . . and fortunately, Martin was reminded of another sneaky, brilliant tactic used by Chelsea in the opposing team locker room

Have the boot locker low down, close to floor level, so that the away team player player has to bend down (and hopefully strain their back in the process) … and then position very large coat hooks for their kit at head height, so that when they stand up again they crack their head!

Indeed, who does come up with these great ways to influence your opponent. Are locker room designers really studying psychology or are these tactics developed over time by teams thinking about what they dislike? Is there anything scientific about this?

Here’s the abstract of the paper I am reading now: 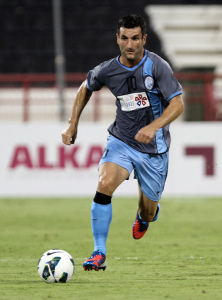 In this study, we examined the impact of soccer players’ uniform colour and gaze behaviour on the impressions that are formed of them by opposing goalkeepers. Twelve soccer goalkeepers observed video footage, filmed from between the goalposts to simulate their usual viewpoint, of four players preparing to take a penalty kick. Each of the four players displayed a different combination of gaze (either 90% or 10% with gaze operationalized as looking directly at the camera) and uniform colour (red or white). Goalkeepers rated each player on a series of descriptors (e.g. confidence, composure, assertiveness) and rated their expectancies for successfully saving penalty kicks from that player. Analysis revealed that those penalty takers displaying 90% gaze were perceived to possess positive characteristics to a greater extent than penalty takers displaying 10% gaze. Results also revealed penalty takers wearing red were perceived to possess positive characteristics to a greater extent than those wearing white. Goalkeepers reported higher expectancies of saving penalties from penalty takers displaying 10% gaze and wearing white uniforms than any of the other combinations. Our results therefore support the potential importance of gaze and uniform colour in the formation of impressions and expectancies in sport.

Jersey color and where the player was looking influenced the Goalies’ perception of how well he would do at saving the penalty. That’s bold.

Though Martin is no fan of Chelsea, the research was conducted in part at Chelsea. And even the Brits are naming the game Soccer in the UK journal . . .