Say what you will about gun control, there is a certain amount of empowerment that comes from understanding how to use tools – in this case guns. I also think it’s useful to know how to drive a dozer, hang sheetrock overhead and mulch the yard, but then that’s what I grew up doing.

Sane people using deadly guns for peaceful means was a concept introduced in college. It was during my college days that Texas’ Concealed Handgun act passed. Some of my favorite people became Marines and all of them knew how to fire weapons of various excitement. It would, afterall, become a condition of employment. I stayed on the New England side of gun-totting which is to say, NOT totting. I would be shocked to learn that any of my family members owned a gun post military service. This despite the fact that my paternal grandfather and his brothers owned a Liquor store, my godfather/uncle was a career Naval Officer and another uncle was a street detective in D.C. We’re a peaceful, academic family. Gun-totting is not the norm in Rhode Island and Massachusettes. 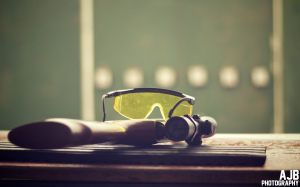 It wasn’t until Fall of 2001 though that I had my first practice with a real firearm. I’d been pretty handy with a BB gun as a little girl, but a 45 packs a bit more punch. My first range outing was with a motley crew including my boyfriend and my boyfriend’s most recent ex-girlfriend. Hmmmm, yes, it did actually become a problem. I vividly recall the 45 being pointed at my face by said ex-girlfriend – that, for the record, is bad gun range etiquette. Nevermind, I discovered that 1. hitting the target really wasn’t too difficult and 2. damn that 45 is a heavy piece of #$#Bleep#$#. I cozied up to the 22 and enjoyed the day. But, this was not a sport I planned to master….

Fast forward to today, literally, today. This afternoon I had a chance to visit a range once again. I thought we would be firing the ubiquitous AK47, but instead we had a 9mm and a 357Magnum. Okay, fine. I wondered if I could even hit the target.

As it turns out, yes, I can hit the target!

I started with 38 rounds in the 357 and then moved to 357 rounds in the 357. The 9mm was gumming and I have no interest in fooling with a gumming gun. Thank you, I’ll stick to revolvers for now. After a few rounds, my friend explained how to actually aim the weapon and bammo! I was in the center of the target. Could it really be that easy? As it turns out, yes. And quite exhilerating too!

So if you are on the fence about guns, consider finding a gun-totting friend who’s willing to introduce you gently. Or head over to a local range as ask them for a little guidance.