Earlier this week a reader reminded me of another example of a record breaking performance that comes in second place. 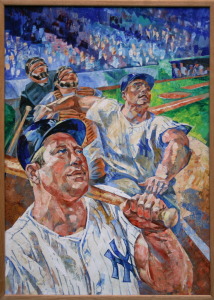 In 1998, Sammy Sosa soundly beat Roger Maris’ 1961 home run record of 61 in one season. Sammy was the first player to hit 65 in one season and finished the year with 66 home runs. Yet, he finished second.

Mark McGwire finished the season with 70.

The back-and-forth can be seen in Wikipedia’s Home Run Record Chase. Early on in the season McGwire is well ahead of Sosa, but then Sosa catches up in June. By September it is almost back-and-f0rth between Sosa and McGwire. This story would play out again with similar results in subsequent years.

From a talent development standpoint, would Sosa have reached 66 home runs if McGwire hadn’t been slugging? Or was Sosa’s personal record developed from the competition the home run derby created? Was it this non verbal influence of McGwire that pushed Sosa to perform?

A look at subsequent years is telling.

It is only in his *off* years that Sosa led the league in home runs. The years he performed his record setting best were years when another slugger was well on his way to breaking records.

It is also interesting to note that home run levels today are nowhere near what they were during that stretch from 1998 to 2002. While steroids may or may not come into play, the level of competition is more likely the bigger driver. If there is at least one other player who can challenge you, push you, then a competitive athlete will step forward into the challenge.

Special Thanks to Cliff for the photo.