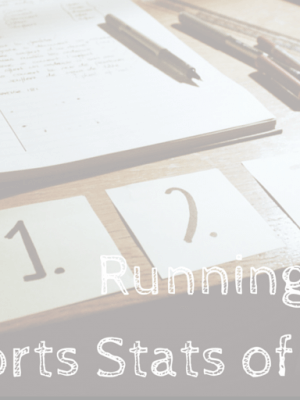 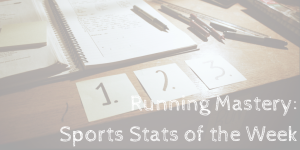 So you probably thought you’d hear about hockey this week given that preseason begins . . . now, but instead how about a diversion to running.

In tandem with my research on the non verbal, environmental cues that foster the growth of super stars I get to look at super stars themselves. It’s really amazing to watch a fast runner. Fluid movements, precision.

As a little girl I dreamed about having both the speed and style of Jackie Joyner Kersee and FloJo. They were magically fast and yet wildly stylish – the best of both worlds.

So is it true that competing with someone great will make you greater? For this weeks statistic I pull the records from record breaking running events. Did second place also beat a record? Did second place set a personal best running against the record setter?

Of the 23 world record breaking times sampled, over 50% of the time second place either broke the previous record as well or recorded a personal best. There’s also a very strong trend of peak years when the record is broken multiple times in a year – usually between May and August. For the Men’s 100M dash, peak years are 1968, 1987, 1988, 1991, 2006, 2008 and 2009. Often it is a competitive back and forth for the eventual breaker with his main #2.

9 thoughts on “Running Mastery: Sports Stat of the Week”