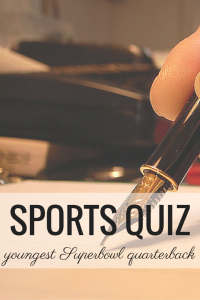 Sports Stat of the Week

It’s all in the numbers….

Never mind what happened Sunday afternoon . . . I turned off the second display in my office and focused on teaching our Advanced Quant class. The students didn’t have to know the Boys were being destroyed by Future Rapper Favre.

(Pants on the Ground? Really? What the ?)

Putting the old back in oldest quarterback, Favre is still looking pretty good for an old man – especially one who gets 2 ton  of man hurled at him at 20mph regularly.

Should the Vikings make it to the Superbowl AND earn a win, Favre will be the oldest quarterback to win it. But that’s not a done deal. In great contrast, we have had some very young guns earn wins in the Superbowl.

Riddle for you:
Who was the YOUNGEST quarterback to win the Superbowl?

And how old was he at the time of his win?

No peeking. No Wiki….

Ben Roethlisberger was 23 years, 11 months old when he won Superbowl XL over the Cardinals.

Preview of Next week: About those Cardinals – they are one of two original teams still in the NFL. Next week, who is the other team still standing??? There will also be a little smack talk about the winning record of the Cardinals….