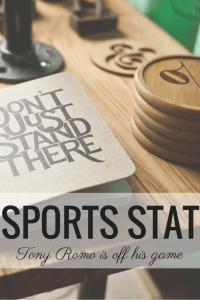 Brett Favre is looking royal in purple. Hard to believe he recently crossed into 40. Though they lost to the Cardinals . . .

“I’m anxious to go watch it on the news because I’m pretty sure everybody is going to talk about what Brett Favre did wrong, and not talk about how our defense stood up today,” Cardinals defensive tackle Darnell Dockett said.

The Vikings are 10-2-0. Impressive.
A 40 year old is making headlines as the dominant beast in the NFL. Priceless.

So how about our Cowboys?

The Sports Statistic of the Week is How do the Cowboys perform against the Giants with Tony Romo?

Until this season he was 4-0 in the regular season (as starter), 0-1 in the post season.

Result: COWBOYS lose 31-33
What did Tony do the weekend before the game? Played in Tampa with teammates. . .

Result: COWBOYS lose 24-31
What did Tony do the weekend before the game? Played in Vegas with playmates . . .
When he lost against the Giant in the post season he also spent the off week . . . um, distracted. He seems to have an unfortunate experience with downtime during the season. Coupled with his “just a game” attitude…. This has not been sitting well with fans in Dallas.
Shout out to Tony – hey sweetie, you get 6 months off, we pay you to play August – January . . . we’d like to give you some extra cash to play in February, but dang, you’re making it hard.
2006:
22/36 COWBOYS lose (Tony Romo was not the starter in this game)
23/20 COWBOYS Win

2009 has not been his best showing. But let’s hope that he’s simply reversing his regular season and post season trends…. What do you think he’ll do in post season? Will we even see the post season??

1 thought on “Sports Statistic of the Week: Cowboys versus Giants”