Would the real Robin Hood please stand up?

“If you don’t stop levying these evil taxes, I will lead the people of England in a revolt against you!” -Robin, Men in Tights, 1993

Mel Brooks made a mildly popular movie to skewer the story of Robin in 1993 – if you love puns, you will enjoy Men in Tights. Remarkably, the sentiment of the Men in Tights Robin is that of many business owners.

The popular current version of the Robin Hood story states that Robin steals from the rich and gives to the poor, making Robin the scourge of barons everywhere. We were so indoctrinated in Texas that we even named an unfortunate school program the Robin Hood program. The Texas Robin Hood program took tax receipts from the “rich” school districts and redistributed those proceeds to “poor” districts. Never mind that the state took a 40% processing fee to handle the money . . . and never mind that the overall quality of education demonstrated a decline (attributable to the policy) in both the supposedly rich and poor schools….

But never mind all that, we were abusing the story! Did you know, Robin Hood probably did not steal, but definitely resisted his local law?

In the August-September issue of Reason, Cathy Young clarifies the story the story of Robin Hood and explains that indeed, Robin Hood was about reducing the burdens of government, not income redistribution. Robin’s original story was one of civil disobedience. He fought the forces of corrupt government. In some versions of the early Robin Hood, he suggests that the local Lord – I’m not making this up – reduce the Tax Burden so the farmers and local townspeople can revive weak industries. 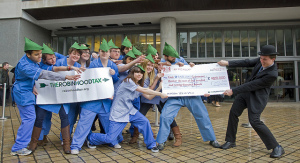 “The one person Robin assists financially is a knight who is about to lose his lands . . . ”

Robin is an outlaw for freedom, not redistribution. So sing the praises of Robin Hood to your kids, but emphasize the message of freedom from oppression, particularly the governmental kind.

1 thought on “The Real Robin Hood”