While this is a “local” rant today, the concept is familiar in every locale. Neighbors don’t talk to each other. Do you know your neighbor? What color are her eyes? How does the little old lady down the street from you like her afternoon tea? This lack of neighborhood commraderie is what leads to the deviants and terrorists hiding amongst us. We are more than our worst enemy.

So today we received a notice saying that the city is considering making the south side of my block 2 hour parking. One block, one side, 6 houses wide . . . until this year, we really 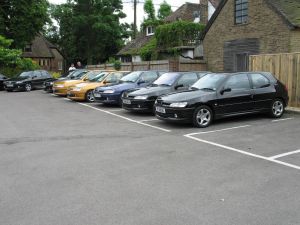 didn’t have a parking problem despite multiple houses under construction, living next to a school and having an apartment house one block over. This year the house two doors down is under renovation . . . by idiots.

Now I’m not one to parse with a fella about how he wants to fix his home, but when a renovation takes more than 9 months AND it still isn’t even close to complete, that means there’s been trouble. Usually the problem is poor organization coupled with imprudent planning. These folks have that and a whole lot more. It doesn’t help matters that they’ve chosen contractors who are not familiar with the peculiarities of my neighborhood. We do not park on lawns folks. Nor do we pull into driveways diagonally. We’re a neat and orderly ‘hood.

So why the rant about parking? Well the contractors make it tough to get one of the few parking spots we have. I don’t mind because my car stays put during the day, but my neighbors seem to have their panties in a wad. Why? Who knows.

The fact is, no one in the neighborhood talks to anyone else in the neighborhood. That’s the real problem. So instead of talking to the neighbors to resolve what appears to be a simple case of irritation, someone has decided it is worth getting city council involved. How much do you think that costs?

Here’s what we’re looking at based on the proposed legislation passing:

Overtime pay for staff members and facilities usage fees for the initial meeting
Ditto for the planning meeting that has already happened after office hours
Printing costs for the flyers
Plastic bags so the each flyer could be weather-resistant (seriously – despite everyone having a covered porch-area…)
Human labor to deliver said flyers to each house and vehicle
Signage design for posts
Post and signage installation (concrete, labor – 3 man crew)
Enforcement . . . this is the kicker

So about enforcement . . . we don’t have “metermaids” in the area, nor do we have any 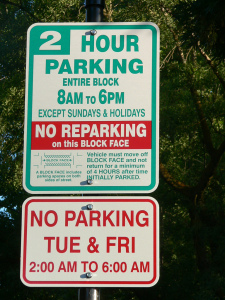 Are you seeing the dead weight cost of this proposition? I don’t know the actual total, but it strikes me that it is non-trivial. As a tax payer, I’m a bit miffed to be footing the bill for something so trivial. Don’t we have better things to do? I thought we were really concerned about growing the library last year. Can we ever have too many books?

If it is the neighbors on the south side who wish to have their views unblocked by vehicles, I wonder, do you think they’ll really prefer mowing and edging around the new signs that will be in their yards? Signs in yards do not increase property value as it turns out….

One conversation by the “injured” party whomever he or she is with the “injuring” party could probably have solved this problem months ago. But instead of acting like adults, someone is being controlled by his/her 6 year old overly self-righteous self. Or maybe someone’s just an ass.

It’s days like this that I want to chuck it all and join the circus. I’m surrounded by loonies I may as well enjoy myself.

Am I the only person who thinks avoiding conversation with neighbors is a bad idea?