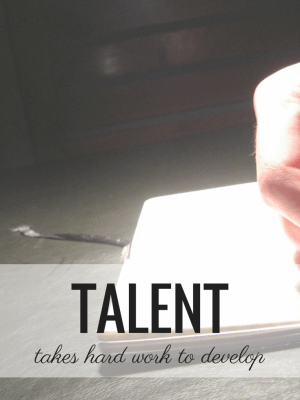 Talent is one of those things we talk about all the time, but very rarely define. How often do you refer to someone doing something incredible: Tiger Woods, Tom Brady, Michael Phelps, Dara Torres, Usain Bolt as a Natural Talent?

Since that often feels a bit like a cop-out, let’s dive in to the science of Talent. 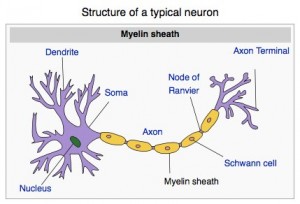 That white stuff that wraps your nerve fibers and keeps the electric impulses from slipping into the ether. The more myelin, the thicker the insulation around the nerve fiber, the stronger the impulse received. The more complete the training any given moment.

Firing on all cylinders
What produces talent is constant firing of the right neural pathways. Keep firing them and the myelin builds. The more you fire (the right paths!), the more myelin . . . the more myelin, the more signal reaches . . . starting to sound circular yet?

A little bit of sporadic effort produces next to nothing as a result.

A lot of effort expended regularly in any direction produces results in that direction.

A lot of effort expended regularly and in the direction of the goal gains exponential results. 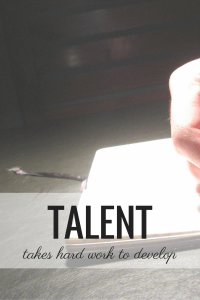 But what about these Natural Talents?
What about them? The talent is natural, but it isn’t in-born. That’s the good news. Here’s the sobering part, the natural talent requires significant work.

By the time you have expended 1000 hours or more on developing a particular skill, you are better than 95% of the population for that skill. AND every minute you spend practicing is worth 3 minutes of a less myelin-wrapped competitor.

Your insulation from the competition is literally in your head.

That’s why Einstein’s brain had all that “white stuff.” When Einstein passed away, his brain was studied thoroughly. But no one understood what all the white stuff was. Looks like it was myelin.

Stumbling to the Top ™

So how do you get talent? Start now!

Studies demonstrate that adults still produce myelin well into their 60s and it proves to be an excellent way to hold off disease, particularly those that affect the brain. It is never too late to start. Though you might not be racing Usain Bolt around the track as a 50 year old, there’s no reason to delay your interest in painting. You can develop a masters talent, but it won’t be overnight.

There’s nothing easy about Talent. It is all hard work. In short, you develop talent by stumbling and staggering in the direction of your goal.