In late September I started a hiring process. I was attempting to hire 2 writers on a temporary to permanent basis. I took applications electronically; I gave skills tests, written and phone interviews. It was a fairly thorough process – no CEO vetting, but involved – more than what you might expect for a $30-40K, part time writer position.

I narrowed the field to 7 and offered 4 a paid trial period. Two of those writers were not heard from ever again, and the other 2 did not prove to have the full skill set  professed…. Okay, fine, scratch those 4. (Under my breath I curse *creative types*) The next 3 in line didn’t bother responding to my trial run 2 weeks later – I don’t blame them, but they can’t really be as passionate about the subject as they claim if they aren’t willing to take my call 2 weeks later after telling them they would be in the second round. Full disclosure on my part.

So by this time it is mid November and I really need a solution to my lack of writers. I put the word out in the community, but I don’t really hang with writers so it was a slow trickle. Finally at Thanksgiving I was put in touch with a new college grad who needed cash and claims to be a copywriter, had credentials, etc. Perfect!

It looked like we’d at least pull some content out before the holiday dash, but he vaporized right at the climax of the process leaving a big fat zero behind. You see, he got a full time offer. Now, I am happy to hear he’s gainfully employed, but would it have killed him to send me an e-mail upon deciding that he wasn’t going to finish up the project? Four plus days later he dropped me a note to let me know he had a job. Thanks buzz-boy. Brilliant.

Where do these folks learn their manners? It’s one thing that we must have Britney’s delicate bits thrust in our collective faces – for that I gave away my TV and I don’t bother with radio. It is a far greater shame that common courtesies such as letting people know you’ll be 5-10 minutes late or (heaven forbid) you don’t plan to do the work on a project to which you’ve committed, are so terribly uncommon. 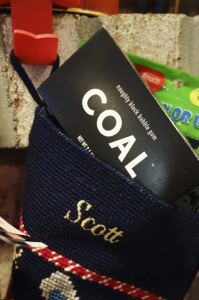 additional part time job during their early working years to scrape together cash…. Is that value lost on this new generation? Must we know more about Brangelina’s sex secrets and less about how to treat each other in civil society?

So with that I am on a hiring freeze in the USA. I will not hire anymore brats, young or old. We’re spoiled and fat. COAL FOR US ALL THIS CHRISTMAS!

I’ll hire in countries where people want to work, show up for work and produce when and WHAT they say they will produce. I’ll stick to countries where they think you’re a stud if you are clever enough to work a few extra hours to save a few extra bucks. I’ll go back to having my 5:30A conference calls so we can get Europe and Asia on the same call. And like a cranky old man sitting in his rocker on the main drag of main street 50 years ago, I’ll shake my little fist at all the whipper-snappers zipping about with their infernal ipods and doodahs.

1 thought on “Why I outsource? Because you are lazy.”