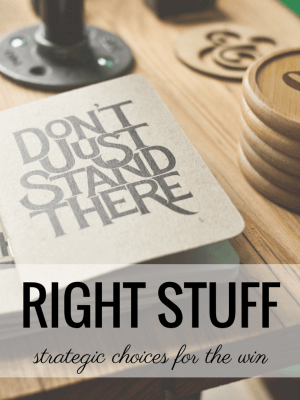 I help people reach their professional dreams. A few start early, age 12. Most come in around age 24 when they are preparing to go to graduate school – for some this is a reset button, for others it is a continuation down their well defined path. The first step is to determine what the candidate can master both through skills and interests as the next 50+ years dedicated to work are much easier to bear when you have a willingness to master your area. Then we figure out the most efficient paths. Often that will lead to schools such as Harvard and Harvard Business School. Not a romantic notion of learning and camaraderie, it is a strategic decision.

When it comes to elite school admissions, there’s a game. If the outcome of an elite education is important for your long term development, you need to acknowledge that there is a game and learn what it is so you can choose how you want to play it. For those less inclined toward the elite education path, beware cutting your interest prematurely**.

Part 1: Don’t confuse how you want the game played for how it is played.

An admission colleague asked me my thoughts on this article, which is summed up with this excerpt:

Sometimes this toughness comes through in the application proper. Were you an award-winning debater? Did you write snippy op-eds in the paper? Did you muscle out people with Ph.D.s to get a second author on a scientific paper? Have you had to endure a lifetime of pressure from your legacy parents, warning you that if you don’t get in, you’ll be disinherited? Congratulations. You’re in.

As someone involved with admissions overseas she felt strongly that “international admissions are even more skewed towards the children of the elite.”

Is it okay that some schools seem to favor the children of the elite? As a family you can reject the elite status that Harvard and Princeton proclaim. After all, you don’t need the Ivy League to be successful. Choose any industry and you will see a broad spectrum of non-Ivy grads at the top. Why all the fuss about elite schools?

Elite schooling is a personal brand issue. It can have substantial impact in your career and your ability to enter certain fields. For practical reasons, as someone squarely middle class, I think it far better to be able to decipher which schools will impact my progress than to have blanket statements about elite schools. Not all schools can generate the access you may need within your field. I’d like to know in advance what battles are ahead for me – so I can choose which ones to fight and which ones to avoid.

For example, The University of Chicago is a great school – strong quantitative programs and excellent faculty, known for Finance and Economics. But Chicago undergrads find far too much competition for getting to NYC. The deeply entrenched Ivies and NYC local schools have far more pull for analyst positions in NYC. If you study at Chicago and you wish to work in Finance in NYC, expect to make a detour through Chicago, Houston, or Dallas working with commodities or energy.

For the Chicago student who really wants to work in Finance in NYC, it is important to understand just how much bigger the uphill climb for his target analyst role will be. Understanding the game allows him to choose different recruiting opportunities or to make a different school choice. 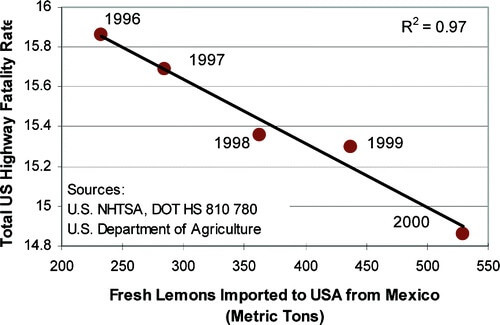 Correlation: The Quantity of Lemons imported has increased as Traffic Fatality Rate has decreased.

This boils down to a broad problem in society of confusing causation for correlation. At our worst, we draw lousy conclusions from complicated information. We depend heavily on patterns we think have worked before.

In any one case, with appropriate information, a reasonable adult can suss out the difference in causation and correlation – the lemon/traffic data example. Does it seem reasonable to conclude that importing more lemons has reduced the traffic fatality rate? At the very least we would be suspicious of the conclusion and would (hopefully) seek more information to corroborate the conclusion. A conclusion is always an opinion. When faced with too much information, we make really simple stories out of the data. In that overload we look for markers – cues that match patterns we recognize so we can draw a conclusion and move on.

Brands live and die by that. Elite schools have particular brands and the brand has very little to do with the content of the education. By default, others who understand the brand lean on it to do their evaluations of you.

Texas A&M has been an excellent Engineering school for generations. Civil, Mechanical, Aerospace, etc. We can build great things. But Texas A&M is not known for its History department. The BA from TAMU in History isn’t likely to carry much weight with academic departments should you seek a PhD and isn’t likely to prepare you for anything other than cocktail party conversation. So if you want to be in that field, you would be far better off at a different undergraduate institution. When I see a resume with BA History from Texas A&M – my alma mater – I try to keep an open mind, but do immediately think, “Wow, this kid had no idea what he was doing and frankly, screwed up. 1. He missed the best opportunity – our ENGR resources, and 2. He didn’t notice how bad an idea it was to major in History at an Institution that does not prioritize the History department. Double whammy.”

Everything you do sends a signal. For better or worse.

It’s worth knowing what signals your choices send. You can’t control all the signals people read on you, but for the ones you can . . . wouldn’t it be nice to know which choices can help you the most?

Premium education is freely available.
And it has been. For centuries.

The Public Library system including the US and the World Libraries has housed massive amounts of information, which has been largely freely available for hundreds of years. Perhaps not always easy to access, it’s been there, waiting for the diligent scholar. As academic journals have proliferated, some have been removed from public circulation (often due to expense), but the WWW has now made even those most abstruse journals available, International Journal of Fuzzy Systems (not about cuddling) for example. 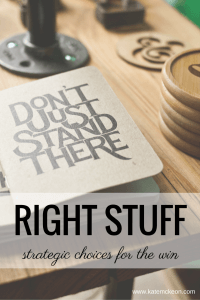 Admission inequality ends up self-perpetuating in part because most candidates don’t realize the game they’re playing*** and those who do have no incentive to share the game strategy. Imagine you were on a 400m oval track. You and an opponent are told the race is complete at the 300m mark. If this were a high stakes race like the push to get into top schools, would you share your running strategy? Let your opponent run 300m. You’re clever enough to run 100m in the opposite direction. No one said which direction you had to cross the 300m line.

I spend a good deal of time with my uninitiated candidates on understanding the perspective of what school choice is all about in terms of network effects, access, and patina. I also help them understand that they may not be accepted on the professional path they want in a way they want, but that they can prepare for success on that path anyway, i.e. you’ll get accepted at School X, but you’ll be perceived as the class dummy. In that case, don’t expect to make friends. You just have to survive this stage so you can thrive at the next stage when you get to break into your chosen field. If you understand what’s waiting for you on the other side it becomes far easier to endure seemingly dark days.

I can’t really blame the Elite schools for admitting the predetermined elite kids. The not-yet-elite kids will still be less-elite when they come out – not necessarily in terms of economic advantage but in terms of access and perspective on what to do next. We are conditioned at a very early age. It is very hard for us to throw off our family values and habits.

The elite kids know what they’re supposed to do next. And who to call. And which jobs and companies will give them the biggest boost. Kids who didn’t grow up with that access have a harder adjustment to school and the next phase after school. A student might have to change aspects of his personality to capitalize on his new reality. He’ll face push-back from friends and family. He may stay stuck in limbo.

Is it important for Harvard to invest its reputation in people who only have a cursory understanding of what the power of Harvard can do? It’s a social engineering question.

What good is a moat if there’s no one to keep out?

Imagine you are the Harvard Admission office.

You have spots to hatch 2000 eggs out of the 10,000 eggs who apply. Which eggs will hatch into the best ducklings for your institution?

The eggs’ happiness isn’t Harvard’s concern. I’d even say it’s not the potential future donations that are of concern. It’s the persistent brand impact. 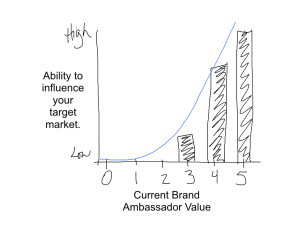 *A quick note about legacies because it kept coming up in editorial comments…. I don’t think legacies are very advantageous. Not at all for HBS and not much for undergrad. Indeed a Harvard admissions person stated that the worst position you can be in is that of a double legacy. But that isn’t the full story. A double legacy who is also a future mover-shaker is a shoo-in. But a double+ legacy who is lame is barely a 2 on my scale above and not likely to be admitted. Legacy may make you a 2+, but you had better be able to carry yourself up to the 5 – i.e. you’d better be a compelling person.

If you accept a group of zeros – people who have no real ability to influence other candidates directly and indirectly within your market – and build them into 2s and 3s, the new 2s and 3s may be much better off professionally, but are you as Harvard? If you take 5s and help them stay 5s, you maintain your brand presence. Throw in the rare zero who can climb to 5, a small number of 3s who can climb to 4s and 5s, and you have a strong presence that creates brand craving, a moat around your Ivory Tower. The brand benefits from the children you reject just as those you accept. What good is a moat if there’s no one to keep out?

Harvard isn’t for everybody. No one needs Harvard to have a great career and a fulfilling life. You have access to the same content – perhaps not as neatly packaged – freely available. But if you want to be on a particular path and 75% of the people on that path went to Harvard, you need to learn what they learned and begin to operate the way they operate so you can join their ranks. It all depends on the path you choose.

Once you choose a path, learn the game at play.

**For those who would shout that Harvard isn’t important, etc. Fine. Sure. Of course. I don’t think Boxing is a particularly interesting sport. But if I wanted to become a World Champion Boxer, I’d better learn how to land punches, take hits, and manage aggressive promo staff. My objective is to get you to consider what the game you are getting into really is, so you can play it well.

***And the more your family emphasizes fair play and middle class American values, the less likely you are to consider alternative routes – at least the first time on the track.