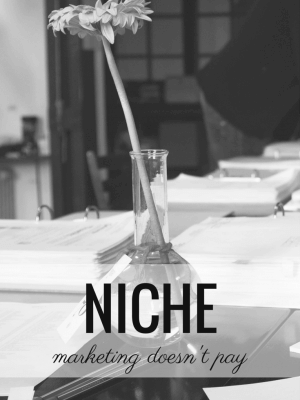 The internet has brought tremendous opportunity to the masses. Who would have predicted 20 years ago that selling schlocky stuff that didn’t sell at your garage sale on a little community website would allow you to make millions of dollars?** Yet, eBay has done just that.

The success of eBay highlights the idea that as individuals we are all interested in very different things. From this we started to hear about the long tail . . .

If the Big Head, mass culture, promotes Britney Spears, the Long Tail offers ambient dub (a music style no one knows about), 80s hair metal bands that never made it on a tour and other seemingly obscure offerings.

So, the world of marketing heated up with talk of micro-marketing, niche marketing and plenty of other adjectives that describe small + marketing.

Chris Anderson of Wired even wrote an entire book on the Long Tail; it was a phenomenal success. Supposedly you could produce and market a wide variety of long tail items and make even more money than subjecting yourself to the massive competition of the big head. Yeah for the little guy! 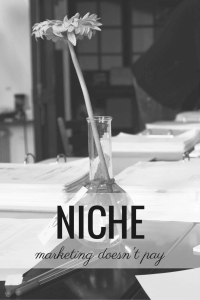 With all the talk about how powerful marketing could be now that marketers can essentially offer mass customization, we forgot to look at the data. So let’s do that now.

Charles Blow reports in the NY Times that:

“A study last year conducted by members of PRS for Music, a nonprofit royalty collection agency, found that of the 13 million songs for sale online last year, 10 million never got a single buyer and 80 percent of all revenue came from about 52,000 songs. That’s less than one percent of the songs.”

If that doesn’t demonstrate the Pareto principle or Zipf’s curve, I’m not sure what else could. Ten Million never got a sale. If you owned all 10 million of the long tail songs, you had amazing ability to capitalize on the Long Tail, but you made ZERO dollars. Indeed, the irony is, if you owned all 10 million long tail songs plus 1-2 very popular songs, the record industry would attempt to shut you down for monopoly . . . as long as you have nothing popular in your catalog, they aren’t paying attention to you. Because, they know….

Look at search results on google. How many times do you click on the second page of results? How about the 40th page? Ever? 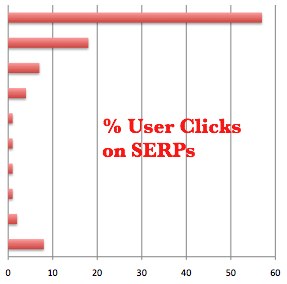 Being in spot #10 on that first page of google is actually better than being in spots 5-9, because so few people want to click on the second page that they click on choice #10 of the first page rather than roll to page 2. Searchers are desperate to get out of the search engine results pages and into an authority site. So if the first few 1-3, sometimes 4, entries didn’t get them excited, they will scroll that first page. But they will make a choice among those first page items.

It varies by search term, but searchers overwhelmingly chose the first search result: 55-75%. For the top 3 search results expect 85%. Search result 10, the desperation click, can garner 8-10% of clicks leaving very little for results 4-9 to split. We disproportionately reward #1.

**I sold a set of not-totally-awesome kitchen knives to someone in Australia! He paid as much for shipping as he did for the knives. I had written a clever story about the adventures the knives had almost had, dinner parties the knives almost served…. I suspect he purchased the long tail writing effort more than the knives.

8 thoughts on “Why you want to Win”