In a departure from the somber tone of education issues, The February Winner of the Date with Kate is Laurel Lichty of Washington DC. Photo of the two gals below.

It just so happened that the DwK was sandwiched between hikes around DC in the record breaking “Snowpocalypse,” Brunch with Drag Queens, and snow ball fights. If anything became clear, it was that more sequins for daytime attire is in order. 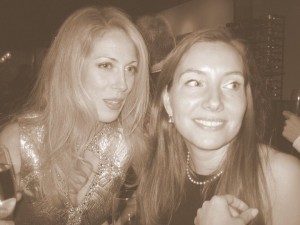 The white-out gave me ample opportunity to discover that the patent we were writing was indeed already written. But, good news, it expires in 18 months….

More on that in March. 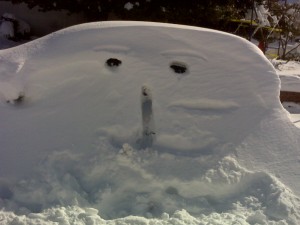 So it took an extra 36 hours to get out of DC and 36 hours after arrival in Dallas, the snow storm hit here. I’m totally cool with the light fluffy snow . . . in moderate doses. Perfect for trail running even though somewhere below the crunchy layer is plain sidewalk. Great times.

In great contrast to DC, business did not stop in Dallas. Nor did school. The cheese shop was open. Even my postal officer delivered….

DC shut down operations on Thursday evening. Literally. Law firms, government, even the colleges sent notices that they would not open on Friday. Turns out I don’t know anyone in Business in DC. Perhaps there’s the rub….

At 11a on Friday, no snow. It wasn’t until 1p that I started to see flurries. And it didn’t stick until well past midnight. But Metro lines were closed and folks were encouraged to stay home. Naturally, I went to a hockey game instead. Someone has to support the economy!

No, no, really, you’re welcome.

Saturday, however, was a whole ‘nother story completely. Solid snow pack with more dropping by the minute. DC was eerily quiet. No cabs, no metro, no buses, and NO SNOW PLOWS. Very few places were open and very few people were out.

Despite all day sunshine Sunday, no effort was made to clear the streets. Monday, ghost town. Tuesday, more cars, less sense. Very few roads had enough of a path to drive. It was certainly safer to walk. But few sidewalks were cleared. So, it was back to pre-sidewalk days. People and cars shared the streets – I halfway expected horse-drawn carriages to join the show.

When I asked a cabbie (one of the 7 in the city) why they didn’t bother plowing the streets, he said, “Well, they say it will snow some more so we are saving money.”Hrmmm.

What about the waitress who depends on tips whose restaurant isn’t opening. She just earned a week of unpaid time off. Or the business owner who still makes payroll even though she won’t be earning revenue this week. Kind of a bummer. I snuck out on one of the few flights to depart Regan National.

Such a different world.

Hope you are warm wherever you may be! -Kate